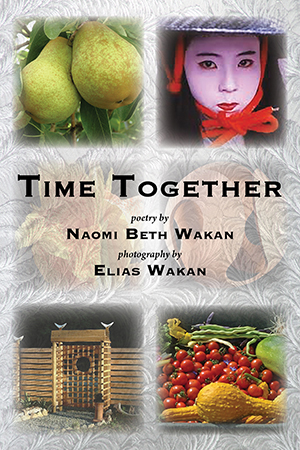 Time Together, a collection of poems and photographs by Naomi Beth Wakan and Elias Wakan, is dedicated with love to Gabriola, the island off Vancouver Island, British Columbia, where the couple have lived for over twenty-five years. The Wakans are solo artists – Elias, a photographer and sculptor, using wood as his medium; Naomi, a personal essayist, poet and dabbler in many other art forms. For this book, however, the Wakan’s did a joint venture – Naomi supplying tanka to match Eli’s photographs. Creating it was an opportunity for them both to look back on their time spent with each other, as well as their time spent on the island whose earth and people have gifted them with lives of joy and bounty. Time Together is a celebration of longevity, community, and love.

Available at Pages Marina and Resort Bookstore on Gabriola.

On the right hand page, this Tanka poem in black type on a grey background. Facing it on the left page a photograph in shades of white and grey of one bowl from a Japanese tea ceremony. Photo and poem, apparently simplicity exemplified, convey what this beautiful little book is all about, a shared life of many years, and now of letting go, but the things which fall away have been precious and details have been noticed. Naomi and Elias Wakan tested much of the world before, in 1996, choosing Gabriola as the home-base for their parallel art careers. Naomi has been therapist, teacher, publisher, fabric-artist, essayist, poet and internationally known practitioner of Haiku and Tanka. Eli turned his Stanford math and philosophy studies into algorithmic constructivism as an art form; i.e. incredibly complicated and endlessly detailed wooden sculptures now in collections far and wide in and out of Canada. He also creates photography of breathtaking clarity and beauty, Eli and Naomi have always proudly supported each other’s work, and now collaborate in the aptly titled Time Together.

The unassuming cover does not prepare the reader for the richness within.

Three sections, “Nature”, “Human Nature” and “Creativity” overlap, as they do in life. Each photo has its corresponding Tanka, a tiny perfect 5-line poem based on the Japanese tradition.

Some photos are double-paged with poem superimposed, as in this of the Wakans’ giant Japanese Shiro plum tree (“summer gardens/ do such greens/ exist elsewhere? I start to count – olive,/ turquoise, Kelly, forest, lime”) or the one of Elias’s sculpture Triumph, now in a UK collection (“perfection/ is rare, but when/ it occurs/ the whole world rejoices/ with one full voice.” Sometimes the poem has its own space, facing its photo on the opposite page. Some are local and specific to Gabriola – the ferry, the clinic, the Tunnel, the fall fair. Some are personal – friends in the garden, Eli taking one of his famous swims off Drumbeg Park, Naomi’s annual gathering of Haiku aficionados, their dining-room table elegantly spread for guests, Eli’s sculptures, Naomi’s knitting. Others are more universal, and yet in a way even the most local and personal are also universal, if it is the artist’s role to “see the world in a grain of sand” – to quote William Blake, artist/poet par excellence. After all, as Naomi proclaims “one does not write/ because the goldfish play/ at the bottom of the water fall,/ but because not everyone/ can see them.”

In the book’s final double-page an unknown photographer captures a slightly younger Eli and Naomi aiming their cameras at something in Kyoto, Japan. “two artists/ under one roof/ not a thing/ that folks recommend,/ yet here we are.” Here they are, still enriching our world.

Time Together is a thoughtful and inspiring collaboration of poetry by Naomi Beth Wakan and photography by Elisa Wakan that weaves together a behind-the-scenes glimpse of a life lived together in companionship and art. While reading Time Together you quickly become attuned to the Wakans’ rhythms, the ebbs and flows of life in their home and island community. A place, which provides time and space for thinking, writing, reflecting, and making.

Near the end of the book you come away with one of the most important philosophical questions we can ask ourselves. What is a life?

Naomi Beth and Elias Wakan, beloved artists of Gabriola, “bring heaven closer to earth”.  Her poetry and his photographs reflect their love and life together on this small island. Their meticulously crafted works, both enrich and are uplifting. This is a celebration of a glorious cultural fusion: a wife’s poetry and her husband’s photos. Here a critical eye blends with a generous heart.

Time Together interweaves images and words in a lucid meditation on presence, patterns, and essence. Gabriola’s communities of nature and of humans emerge as microcosms of timeless rhythms, where the fleeting and the eternal are made manifest in each other, in a hundred different ways. These are, in the happiest sense of the word, companion pieces, while they also form one work that lovingly marks the passing, and the persistence of our world.

Naomi and Eli Wakan have long represented to me the ideal creative couple: one is outgoing, determined and decisive, the other quiet, reflective and deeply thoughtful.  It is a pleasure to gaze on the images in this book, to observe the distinctly different characteristics of their work and the complementary forces that hold them seamlessly together.

It is a pleasure to spend time with Time Together. Riffling through the pages, whether forward or back, is a colour treat. Nothing glossy here: the Shanti Arts design team has produced a book that brings to my mind the aesthetic of Harrowsmith publications or the Edible magazines that may be distributed in a community near you. Every page is planet-Earth-toned, and every spread is variably laid out.

Dedicated “To Gabriola with Love,” Time Together is memoir, celebrating an island, creativity, a relationship and, ultimately, a co-created life—that of poet and essayist Naomi Beth Wakan and sculptor and mathematician Elias Wakan. Images selected from Eli’s accumulated bank of photographs are paired with tanka by Naomi.

For those who never attended the bygone Gabriola Haiku Gathering (2002-2013), this publication will give you a feel for being on Gabriola Island and at the Wakans’ Drumbeg House. There is even a photo, from July 2010 (yup, I was there), with Jim Kacian and Michael Dylan Welch in rapt discussion and haiku poets in a cozy circle raptly listening. Other photos hearken to the garden where, once, haijin ginkoed and workshopped haiku; yet other photos show Eli’s mindboggling wood sculptures we admired.

A further hint of what this book offers: for example, a full two-page spread of a single photo depicting an idyllically set table, with this accompanying tanka:

the days
when ‘apps’ meant
appetizers . . .
the first act of a meal
we can no longer make

This poem, which appears to be newly written for the photo (versus pairing with an oldie-but-goodie tanka, which is done in some instances), is vintage Naomi Beth Wakan, with its twist on the last line for impact. While there is a bit of unevenness in the quality of tanka overall, as a few have been purposed to give insight into an abstract image or provide context for the memoir aspect, the collection serves the project well. Naomi’s poems thread the whole with gratitude, humour, honouring, reconciliation, and wisdom—and they are enriched by, and enrich, Eli’s photo graphics.

Here is one more tanka by Naomi, juxtaposed to Eli’s wabi sabi photo of a tea bowl:

If you know the Wakans or their work, you will want this book. If you don’t know the Wakans, through Time Together you can come to know a little of the art they’ve made of life.