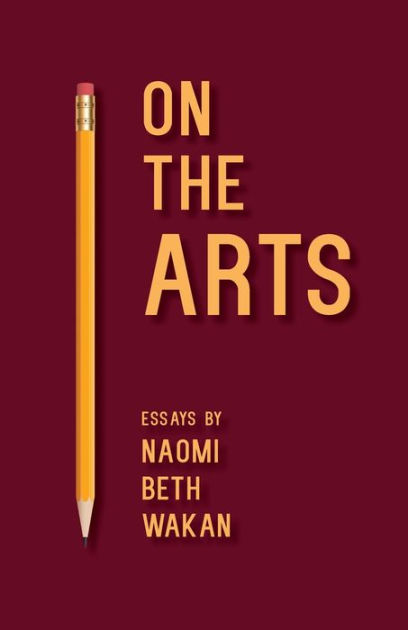 With a strong creative streak and a passion for learning and writing, Naomi Beth Wakan has dabbled in many different art forms during her eighty-eight years. Her activities have led her to see art as the awareness of sensory action and reaction in the everyday. In other words, opportunities for making art are everywhere, and the possibilities for expressing oneself as an artist are endless. One’s very life is an art, if lived with awareness.

In this collection of short essays, Wakan writes about her experiences as someone who both appreciates and practices art, covering topics such as ikebana, photography, reading, film noir, domesticity, recycling, personal essay writing, solitude, and more. This book will entertain, but also awaken the reader to the possibilities of living a rich and rewarding life by infusing one’s life with awareness and creativity.

This delightful collection of essays, poems and musings on art in its many forms will make you ponder and smile and wrinkle your brow, and above all, it will have you marveling at how much wit, wisdom and sheer audacity can reside in one solitary and seemingly unstoppable mind.
Chris Straw

Naomi defines art as “life lived awarely,” and that is her expertise. Lively, juicy, couldn’t-put-it-down good. No one else could have written this book.
Ursula Vaira

Naomi’s enjoyment of creativity in its multitudinous forms is magnetic, and one is left with endless ideas to hammer out at dinner parties por in the local pub . . .One will never be able to see things in the same light again.
Ruth Artmonsky

In On the Arts, Naomi Beth Wakan concludes that “one needs a reason to survive and mine is curiosity.” With a free-wheeling intelligence, Wakan explores the nooks and crannies of her curiosity about art . . . a terrific read for the curious mind that will steer you far beyond its pages.
Margy Gilmour

The essayist and poet, Naomi Beth Wakan, has written over fifty books in her long lifetime, including what she considers her most solid body of work, the trilogy The Way of Haiku, The Way of Tanka, and Poetry That Heals. Now her publisher, Shanti Arts, has brought out a second edition of her popular collection of essays, On The Arts. It is a full study of the many art-forms Naomi has explored in her 88 years and in these essays Wakan not only expresses her own opinions firmly, but offers focused quotes from many artists of the modern and post-modern era.

One of the quotes that struck me was from Carl Jung, who said, “It is not Goethe who created Faust, it is Faust that created Goethe.” And Wakan’s very personal essays show clearly how her own creative expression has formed her own being. If you don’t know who Goethe, Faust or Jung are don’t be put oﬀ. As much as Wakan explores creativity, she is not an academic elitist. Naomi writes for her readers, people exploring their own ways to express themselves, and not the bloviating experts. Certainly she refers to great minds and teachers, but On the Arts is written primarily for all of us who struggle with ﬁnding meaning in the marketplace and city. This book questions the purpose of art, not the ﬁnancial wizardly of auctioneers and world class museums. She makes it very clearly that ART IS FOR US!

Wakan also considers how creative expression is not just for our own mental health, but is for the benefit of our social systems, and most importantly — it is for our survival. We need creative insights to tackle the problems our planet is facing.

In her chapter on the personal essay itself, Wakan writes “I long for the sharp political and personal insights of Nora Ephron and for Phillip Lopate’s elegant essays on anything that takes his fancy.” Then follows this with good advice on what makes an essay elegant or just readable. A ﬁne personal essay is absorbing because it “teaches so much about humankind.” The best personal essays, Wakan points out, “weave the eternal into everyday moments.” The personal essay tells of personal experiences, feelings, reﬂections that are simply sharing for no other reason than to meet you and other humans wherever you may sit, and hers certainly do that.

Her essays range from those on her ‘Japanese years’ (Japanese calligraphy, Ikebana, haiga, etc.) to such abstracts as “The Art of Solitude,” and “The Art of Survival.” She also considers a wide range of other art-forms she has herself explored, from flamenco, to bel canto, to happy architecture, to food writing and photography. There is something for everyone here.

Naomi doesn’t dwell on the crises we are facing. She writes with humility and reverence within the world, and allows the reader space to take from it what they will in order to encourage their own creative outlets.

Every man is at liberty to understand nothing about anything. So said Montaigne. Or at least Naomi Wakan says that he said it, and I am not going to contradict her. He certainly said something very like it. Armed with this ringing slogan, she rationalises the authority which permits her to write so ambitiously On the Arts: “If having twice been married to artists qualifies me for anything besides cleaning studios and helping with promotion, it qualifies me to have a keen eye for art.”

I can match that. As reviewer I can base my qualifications on a half-century parenting two art-history majors, three years volunteering at Vancouver Art Gallery, and two decades of friendship with Naomi Beth Wakan. The last disclosure should disqualify me, but it doesn’t because Naomi cheerfully takes care of the major caveats I might have provided. She admits:

Lack of knowledge has never inhibited my essay writing. Writing is always a learning process for me.

I have dilettanted through many of the arts in my lifetime and in this book.

I am not an academic who researches a subject deeply, but a skimmer who scoops up the odd angle that attracts me, such as the glint of a piece of beach glass on a bed of seaweed. Sometimes, as I am an amateur in most arts, these cullings cast a strange light on accepted concepts — the naive telling of the Emperor’s new clothes, as it were.

The reviewer is disarmed, as is the reader, and we happily tag along with Naomi as she discovers, reflects, and fits everything into a lifetime’s patterns. She has fashioned her own art — poetry, snippets of creative non-fiction and autobiography, fabric art, and embroidered shopping bags — from the stuff of everyday. As the inaugural poet laureate for the City of Nanaimo, she brought grace and initiative to her role, making what could have been a vanity position into a vehicle for joyous community education, taking poetry into buses, onto sidewalks, and within the solemn chambers of city council.

On the Arts first appeared in 2016 from Wakan’s own Pacific Rim Publishers. This svelte new edition from Shanti Arts Publishing has been re-edited, redesigned, and rearranged. The slimness of the volume owes more to change of typeface and spacing than to shedding of content, for while some content has been removed, other has been added. Illustrations have become uniformly black and white. The cover, now elegant in maroon, has eliminated the former enigmatic image by the author’s sculptor husband Eli Wakan, and replaced it with an even more enigmatic photograph of a freshly sharpened pencil. Possibly the pencil refers to the new subtitle Essays.

Could it be that the author/ publisher of the first edition was not entirely convinced that these pieces are in fact “essays”? Many are at least in part “How-to” recipes: how to see, how to make, how to read, how to arrange Ikebana — but also “how to enjoy,” plus a liberal dose of memoir.

Naomi’s curiosity is insatiable and compulsive: she finds out about something, studies it, recreates it, and shares it. These twenty-three pieces, plus introduction and afterword, range from an irreverent examination of the nature of contemporary art, explorations of food-writing and haiga (“a composite form of art, consisting of haiku, calligraphy, and a brush painting”) to recycling and film noir. She touches on art forgers, bel canto singers, and flamenco dancers. The chapter on Ekphrasis, which she explains is not “just a description; it’s a relationship,” gives us Ruskin’s verbal evocation of Turner’s painting “Slavers Throwing Overboard the Dead and Dying,” Michael Dylan Welch’s meditation on Van Gogh’s “Bedroom in Arles,” and her own insight into Alice Rich’s “Dissolve.”

In her sharing, she may come across as both open and opinionated. Her statements are often firmly prescriptive. But that is okay, because, as she admits “the only art form I have come anywhere near perfecting is the art of helping others unblock.” Fortunately she is a good teacher. Her workshops and lectures have earned the gratitude and acclaim of her students, and much of her technique dominates On the Arts.

Nor is she done learning. She wonders whether, having spent years with poetry and non-fiction, she might turn her attention to the writing of short stories. Somewhat surprisingly, her model is W. Somerset Maugham (with Guy de Maupassant a close second): “Yes, I know his stories are dated but then, so am I. ”

As her eighty-eight years threaten to restrict her movements, she decides to turn that restraint to her advantage in the service of a new art form: “So my next focus will be on the domestic front rather than the world stage, and my late-life career will be to practice the art of domesticity,” an art which “might well be described as a long-term happening, a multi-room installation.”

Naomi’s investigation of the vexed question “What is Art?” begins early in the book. The nearest she gets to an answer is “Art is life lived awarely” (her italics). She continues:

Art is asking that you become more aware in the everyday — aware of how you take out the garbage and how you wash the tines of a fork. Yes, as far as what art is, I do think I have something here, don’t you?

And since I am ending with the beginning, this poem, “The Start of Modern Art,” which sums up the book, is placed before the Table of Contents or Introduction. It is accompanied on the opposite page by a black & white reproduction of Kandinsky’s “Free Curve to the Point — Accompanying Sound of Geometric Curves” (1925):

The start of modern art

And Kandinsky came in
from the meadow one day
and, glancing at his easel,
shifted uneasily,
not quite knowing why.
It was at that moment
that modern art was born.
For on his canvas,
no bushes, no trees …
only colours and shapes
on his upside-down-placed canvas
and, if he had been
a flashy artist,
he would have jumped in the air
and turned somersaults.
But being severe and sober,
he merely coughed slightly
and smiled in a bemused way,
realizing that somehow he had
freed art from its subject,
by accident as it were;
shifted art toward music
by a mistake, and,
as he stared in wonder,
the bells rang out loud
from his canvas.

Phyllis Parham Reeve has written about local and personal history in her three solo books and in contributions to journals and multi-author publications, including the foreword to Charlotte Cameron’s play, October Ferries to Gabriola (Fictive Press, 2017). She is a contributing editor of the Dorchester Review and her writing appears occasionally in Amphora, the journal of the Alcuin Society. A retired librarian and bookseller and co-founder of the bookstore at Page’s Resort & Marina, she lives on Gabriola Island, where she continues to interfere in the cultural life of her community.